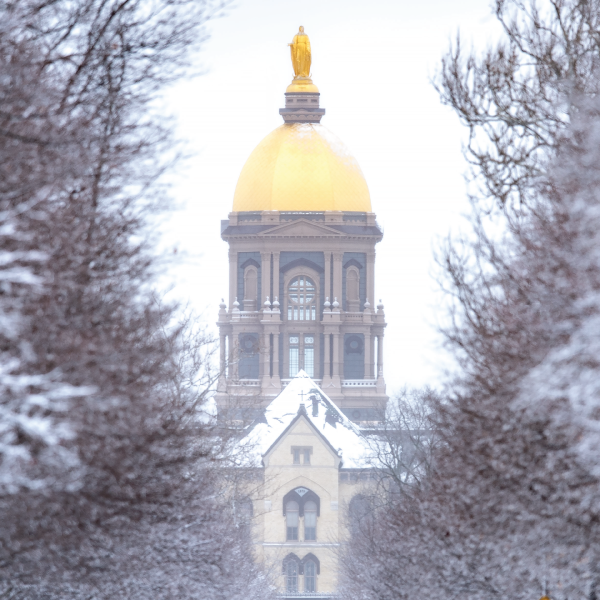 As an assistant dean in Notre Dame’s College of Arts and Letters, Collin Meissner regularly reviews course proposals and finds they follow a certain pattern because they fulfill requirements for various majors.

But this year’s unprecedented mid-year break led the University to create for the first time a Winter Session. This unique two-month period between semesters has removed the guardrails of what academics, researchers, counselors and service coordinators could normally imagine. Meissner said what could have been dead time has instead spurred some very creative ideas inspired by “just sheer intellectual enjoyment.”

“This was an opportunity for people to think out loud about ideas that they have been interested in, or ideas that have been resonating in the atmosphere, and kind of gather them into an idea for a short course,” he said. “It was as though people have just been let loose to come up with something really interesting to offer to engage the students over the long break.”

Meissner is one of them. He watched the recent movie “The Trial of the Chicago 7” and decided to create a one-credit course around it and a favorite modern novel, “The Nix” by Nathan Hill. Both works feature the 1968 Democratic Convention but have clear contemporary relevance. The course title: “How We Got Here.”

Likewise, academics across the University quickly devised more than 125 courses that will meet online from Jan. 4 to Jan. 27. Nearly 4,000 students signed up to take them. Many are one-credit mini-courses, but some are three-credit classes meeting daily.

A mental break was surely necessary after the nonstop tension of a fall semester like no other. But other campus divisions also realized the potential to focus student energy after having December off. After new Provost Marie Lynn Miranda put out a request for proposals, the campus responded with a wide array of options.

More than 120 virtual research experiences were created, along with about 250 virtual service-learning opportunities. The Meruelo Family Center for Career Development helped create hundreds of industry engagement projects so that more than 1,000 students could gain some professional work experience, some with international companies. The center is also offering four weeks of workshops and presentations to help students discern and pursue a career path.

Alumni clubs across the country also stepped forward to offer students short-term “internships.” Shannon Hagedorn at the Notre Dame Club of St. Louis said three students are working on community engagement consulting projects, one focused on diversity, equity and inclusion efforts, and the other on career connections and education.

“I’m hoping to leverage these efforts to generate more participation and jump-start my broader and more long-term objectives for the club,” Hagedorn said.

While some service and industry engagement projects may not earn credits, they allow students to both build their resume and explore potential career interests. Other courses combine service and learning into a one-credit combination.

Jensen Enterman, a first-year student from Colorado, said she is taking a class called “Human Rights Accountability Act Clinic.” Students will work together to prepare a case file against an individual or entity that has engaged in significant human rights abuses or corruption, and they will submit the file to an international human rights organization.

“I was interested in taking a supplementary course that gave me real experience in an area I might pursue in the future,” Enterman said.

Ryan Willerton, associate vice president for career and professional development in the Division of Student Affairs, said the Winter Session is perfect for that kind of career discernment. His office coordinated surveys in October asking students what they would want from the long break. Of about 7,000 responses, many of the students said they wanted an internship.

“The challenge is that this is not a time that employers typically hire interns — with COVID and the short time period,” he said. “So we said, ‘How can we help our students fill this gap?’”

The career center partnered with University Relations leaders, including the Alumni Association, to ask Notre Dame benefactors and clubs to create short-term projects and experiences. Willerton said the response was overwhelming. For example, a circuit court judge in Florida offered a short-term judicial experience. She and her colleagues said they were so impressed by the two dozen applicants that they decided to accommodate them all and mentor them in teams.

“That ramping up happened in several instances,” Willerton said. “So we’ve got this great rallying of support from the Notre Dame family.”

Willerton said the session’s short time period was especially useful to students trying to figure out their own interests. A summer-long internship is a big commitment, but a one-month foray allows for a broader exploration.

“We advise them their major informs but does not define their career path,” he said. “We want to use this as a way they can work on their discernment, discovery and pursuit of a meaningful career.”

The career center is offering workshops with daily themes to help students tackle this challenge while they aren’t as distracted by a full course load and campus social activities. Topics range from network building to finding summer internships to mock interviews. More than 400 students participated during the first four weeks of programming in December.

Xin Lu, who studies tumor microenvironments at the Harper Cancer Research Institute, echoed the theme that the Winter Session broadened opportunities. He said many of his students like to use the summer to do research internships at other cancer institutes around the country.

But then the students — mostly graduate but also one undergrad — miss time they need in his lab. “Now they can do both,” he said.

Other classes offer a chance to engage timely issues. Yvette Rodriguez is the assistant director of programming for Multicultural Student Programs and Services. She said she’s worked with Melissa Bonnichsen from the Center for Social Concerns on a number of projects.

“I just spent some time thinking about what a class about race and racism in this current-day context would look like,” Rodriguez said. “I thought this would be a great opportunity to work with Melissa again, given her background and her deep understanding of the Catholic social teachings and tradition.”

The course is titled “Open Wide Your Hearts” and will focus on understanding race in discussions and reflections. For the final project, students will pick an event, piece of art or something else and lead class discussion around it.

“The ultimate goal is to get students understanding their own beliefs, where they’re situated in all of this and how they can talk to other people about it,” Rodriguez said. “Understanding ways to get people to open up and build bridges and not shut down conversations.”

Meissner, the assistant dean who also teaches literature, said he hopes students will try something outside their comfort zone.

“We have such highly driven students who want to succeed in everything,” he said “The determination to succeed sometimes can circumscribe their willingness just to experiment. They might think, ‘In an ideal world, if I could just do this class instead of that,’ and now they have the chance to do it.”